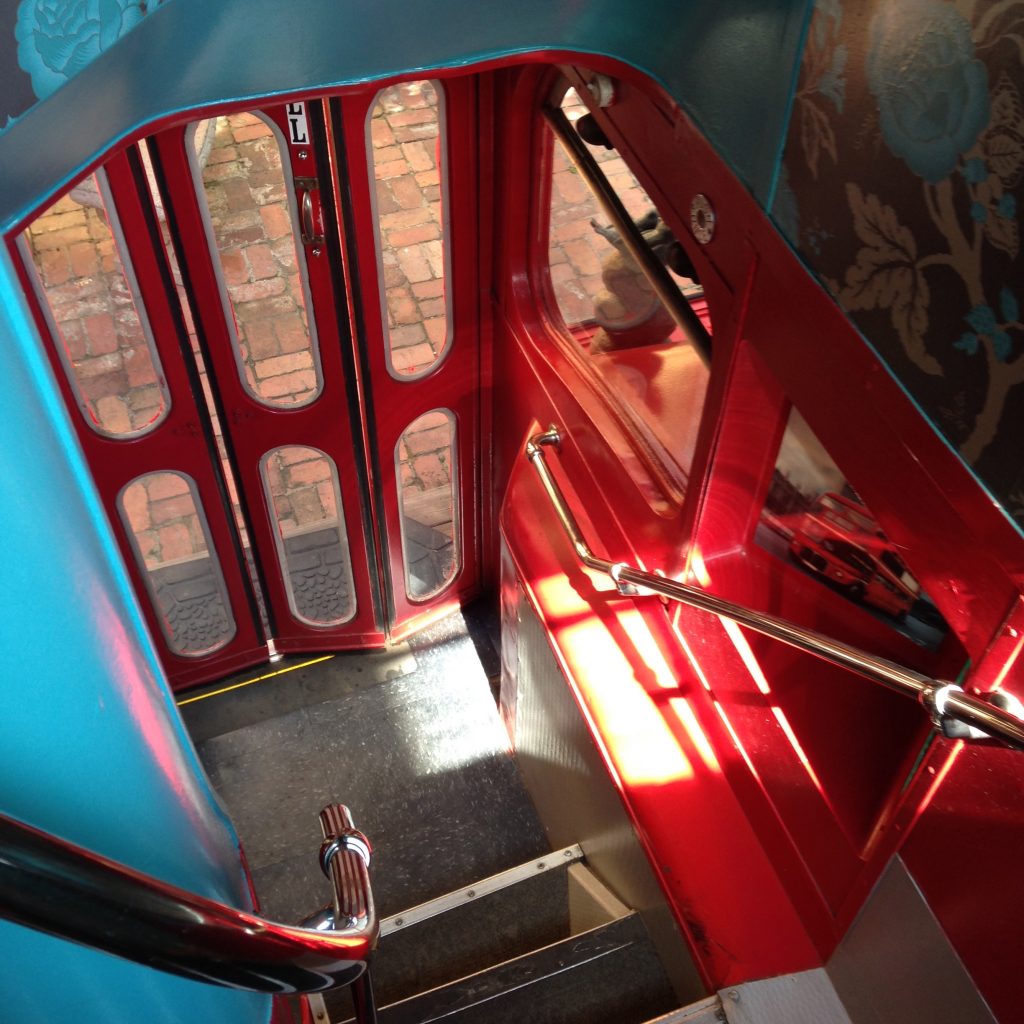 Day 18: I just had to listen to the Beatles as I wrote this.

there is a cafe that i have seen many, many times, yet have never gone “in”.  or rather, “to” it. but, the sun was shining, the air was warm, and i had just enough time, so i decided that this would be the day!

western north carolina people, did you know that there was a real, live double decker bus from england in the middle of asheville’s downtown? and, better yet, did you know that it has been converted into a cafe?! for. real. admittedly, i went for years seeing this big, red bus on the corner of biltmore avenue and ashton street simply thinking it was another piece of art, a decoration, if you will. and it is just that. but, it is oh so much more!

if you take the time to slow down and look as you pass by on the sidewalk, you will notice that this bus is a working cafe. now, whoever had this idea was freaking brilliant. i mean, who doesn’t think that a double decker bus is fun?! kids love it. grown ups love it. it’s just a big ole red bunch of eclectic fun! and to realize that you get to go inside this bus, tucked away under some trees and yet in the smack middle of downtown, to order coffee, well, that just makes it all the more amazing. but, it’s not just the bus, it’s a courtyard patio as well. little concrete tables and bright, red umbrellas to match the bus are available for outdoor seating. i’d had enough of just ooo-ing and ahhh-ing this place from the outside, it was time to board that bus!

oh my gosh. kill me now. i’m in love…. my thoughts exactly as i entered the bus all decked out with a coffee bar from the middle to the back. the front half was a counter for preparing your coffee & waiting in line. there were posters, ads, and other funky decorations making me feel right at home. after i finally shut the fold-in bus doors, the barista greeted me with a smile. i was so excited i just had to exclaim that this was my first time inside and admit to the sweet barista (who must have thought i was a weirdo) that i was pretty freaking excited. i looked at the plethora of coffee yummies and desserts on the menu and decided to go for a pumpkin spice latte, the flavor of the season. yes, i was splurging and mixing it up, instead of simply going for regular coffee. i wanted to celebrate. just because. y’all do that, don’t you?

i entertained myself as she prepared my coffee by snapping photos, thoroughly enjoying myself. when i got my latte in its recycled paper take-away cup, i headed upstairs to the second level to check it out. holy 60s flashback love! i felt as if i was plopped into the middle of a beatles video recording, but i was the first one there. or, perhaps, it was an across the universe movie set. either way, i was channeling a 60s vibe. and i loved it. have i said that before in this post? sorry.

after my little self-tour, as much as i did not want to leave the funkiness inside the bus, i decided that i needed to experience the little patio area too. so, i headed outside,  found a spot under a glowing tree, sat on the cool concrete, and sipped away…

how about a little information about the bus? yes, a history lesson. but, i promise it’s cool. this particular bus was used in the 60s and 70s in bristol, england. a fun fact for me, since i’ve been to bristol. and the time frame must be why i was channeling a 60s/70s vibe. just think of all the people who used this very bus as their daily transportation, with their beehive hairdos, butterfly collars, beatles music, hippie beads… gaaah. so interesting. somehow the bus ended up in atlanta, georgia in the 70s and served not only as a mode of transportation, but gained a reputation through its used as a party bus as well. again, were my vibes spot on, or what?! in 1999, it made it way to its current home in asheville. and there is at least one happy girl that it landed here. i hope it’ll stay forever.

as i sat and reveled in the glorious day, enjoying every little moment, i noticed a man stumbling his way through the gate and into the courtyard. he stumbled his way all the way to my concrete table and sat down. he reeked of alcohol. and his eyes were completely glassed over. he was totally and completely wasted. i had my camera and my coffee cup on the table, so it was obvious i had money. he began mumbling and i asked him if he was ok. he replied that he was, and then asked if i had a dollar. i asked him what he was going to use it for. he asked me if i wanted the truth and i said that i did. he told me he wanted beer. when i  suggested (no, just flat out said) that he did not need any more, he tried to convince me that he did. i asked if he’d had any already, and he said yes. we then began talking about the beautiful weather. and he asked me where he was… i told him. asheville. and inquired if he was from here. no, he was from tennessee and had no idea how he ended up here. before i knew it, he stood up and staggered back out the gate and onto the sidewalk. perhaps the double decker’s owner spooked him. in any case, he was gone in a flash. and i just sat there… (that’s him in the white jacket, in the photo below).

i took a deep breath and just let myself be for a moment. people who live on the fringes, outcasts, do not frighten me at all. i usually enjoy my interactions with them. but, this one disturbed me, in that my hear was hurting after our exchange. it was that helpless feeling of not being able to do anything. my only hope is that i provided that man with a few minutes of rest and kind conversation. though, i know he won’t remember a single thing.

i turned my attention back again to my cafe project, but kept him in my heart. you know how i said there was this cute courtyard outside the bus, and it was where i had been sitting? well, when i turned around and looked behind me, i realized that it continued around the back of the bus. there were more tables and chairs, all nestled under beautiful trees. it was the ultimate little oasis. a natural setting for peace and relaxation, complete with a fountain and lights strung in the trees. note to self: come back after dark!

i have to say, this place is fun. unique. you seriously need to stop by sometime. it’s filled with a positive, upbeat, peaceful, and funky warmth. i felt the history of the bus. i loved the latte.  i can’t wait to sit under those trees through the changing of the seasons. and i really can’t wait to have a few people with me, head to the upstairs of the bus, and channel those hippie, party, celebrating life vibes that are oozing throughout. peace out, man.

Previous Day 17: I traded in being “hip” for a classic American morning.
Next 5 Awesome Places to Get Freelance Work Done