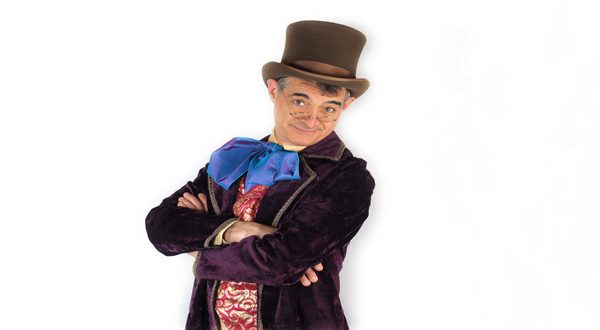 The Playhouse’s Studio 52 Family Series kicks off its 2017 season with an impressive cast of 58 and a classic family adventure in Wonka’s delicious, magical world of Pure Imagination

The whimsical, world-famous candy man himself is back, this time in the mountains of Western North Carolina, as he takes the stage at Flat Rock Playhouse in their Studio 52 Family Series production of Roald Dahl’s Willy Wonka.  Opening March 24th through April 2nd at the Flat Rock Playhouse Main Stage, this timeless family favorite will sport a “delicious stage full of amazing characters, singing, dancing and acting for the inner child in all of us, with perhaps a few parenting lessons along the way,” says Director Dave Hart.

Willy Wonka is the story of Wonka’s quest to find an heir with whom he can entrust his legendary chocolate factory and prized candy making secrets.  Willy stages a contest by hiding five golden tickets in five of his scrumptious candy bars. Whoever comes up with these tickets will win a free tour of the Wonka factory, as well as a lifetime supply of candy.  Young Charlie Bucket, who comes from a very poor but loving family, finds one of the tickets, amidst the frenzy, and is selected to tour the factory along with four other lucky children. As the true character of each child becomes clear throughout the tour of the curiously enchanted factory, the audience can have little doubt as to which has the purest heart to win.

With an impressive cast size of veteran and brand-new Vagabond players, Flat Rock Playhouse favorite Scott Treadway returns to the stage as none other than the eccentric chocolate wizard himself, Mr. Willy Wonka.  With Jack Higginbotham at his side portraying young Charlie Bucket, along with a host of Candy Man Kids, Oompa-Loompas, Townsfolk, Squirrels, and many more colorful characters, Mr. Wonka will surely have a stage full of fun on his hands in this enchanting production.

With Hart leading this cast of 58 people ranging in age from 6 to 60, this family series production brings to life the mission of the Flat Rock Playhouse Studio 52 Education Initiative as families of multiple generations work together to create inventive and entertaining live performance art.  Hart explains, “Many of our cast members are families including: a parent with multiple children, an entire family- mom, dad, and daughter, and many pairs of siblings- it’s very special and just what our Producing Artistic Director Lisa Bryant was thinking of as she created this opportunity for a family theatre experience meant for both cast and audiences.  I love having multiple generations working together and learning from each other.”

It seems that the collaboration is not solely limited to the cast, as Hart also speaks to the creative process behind the scenes. “The most exciting part of the process has been working with all of the creative designers and artists at FRP including Chris Mueller, our innovative set designer, Ashli Arnold with her remarkable costume designs, Paul Feraldi on props, Wendy Jones as our musical director, and Allison Nock bringing dance and movement to life as the Choreographer,” mentioned Hart.  CJ Barnwell and Kurt Conway are also onboard with light and sound design respectively.

A true family classic for decades, Flat Rock Playhouse’s Willy Wonka will be an adventure for all ages.  However, it is always advised that those youngest audience members be somewhat familiar with the story before seeing the show.  As in many of Dahl’s works and any dark fairy tale, there is a balance between good and evil with a few scary moments for the youngest viewers.