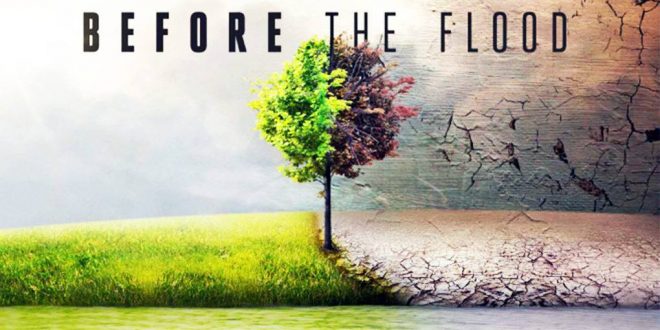 Before The Flood Screening At The Collider 11/28/17

Before the Flood documentary by Leonardo DiCaprio to be screened on Nov. 28 as part of climate and environment movie series at The Collider

Climate change is the “single greatest threat to a sustainable future” and a “golden opportunity to promote prosperity, security and a brighter future for all.”

So says Former Secretary General of the United Nations Ban Ki-Moon in Before The Flood, a documentary from Academy Award®-winning filmmaker Fisher Stevens and Academy Award-winning actor, environmental activist and U.N. Messenger of Peace Leonardo DiCaprio. The film will be screened on Tuesday, Nov. 28 at The Collider as part of the nonprofit climate innovation center’s monthly film series. Doors open at 6:30 p.m.; the program begins at 7.

Before the Flood presents an account of the dramatic changes now occurring around the world due to climate change, as well as the actions individuals and society can take to prevent catastrophic disruption of life on the planet. The film follows DiCaprio as he travels to five continents and the Arctic speaking to scientists, world leaders, activists and local residents to gain a deeper understanding of this complex issue and investigate concrete solutions to the most pressing environmental challenge of our time.

“Time is not a luxury we have,” said DiCaprio. “Our natural world is quickly nearing unprecedented, irreversible and catastrophic change that threatens the very future of humankind. I didn’t want the film to scare people, or present them with statistics and facts that they already know, but to focus on what can and must be done immediately so that we can leave our planet a livable home for future generations. We are quickly running out of time.”

“When Fisher and I set out on this journey, we wanted to make a film that presented audiences not just with the alarming facts about climate change and the environmental crisis it has created — but one that also showed the solutions we have within our power, right now, to drive lasting change for the future,” DiCaprio said. “Our goal was for audiences to be informed and inspired to take action, to stand up and do their part to act as stewards for our shared planet.”

The family-friendly event is free and open to the public with a suggested donation of $10 per person or $20 per family. Refreshments will be provided by Whole Foods Greenlife, Kilwin’s Chocolates, Fudge, & Ice Cream, and Oskar Blues brewery.

Located at 1 Haywood St., on the top floor of the Wells Fargo building in downtown Asheville at Pritchard Park, The Collider is an innovation center focused on catalyzing climate solutions. It is a registered 501(c)(3) nonprofit organization. Access to the building for evening events is through the glass door facing Patton Ave., just a few steps around the corner from the ATM machine.

Located in the heart of downtown "Climate City" -- Asheville, North Carolina -- The Collider is on the top floor of the newly renovated Callen Center inside the Wells Fargo building in downtown Asheville. Here, coworking, private offices, meeting and event space – fully equipped with world class connectivity – is available to businesses, scientists and innovators addressing climate change solutions. Our world-class facility is just steps away from the headquarters of the National Oceanic and Atmospheric Administration’s (NOAA) National Centers for Environmental Information (formerly known as the National Climatic Data Center), the world’s largest repository of climate and environmental data. For more information, visit www.thecollider.org or email us at info@thecolliderorg.
Previous Asheville Taxi Co. obtains “Uber Permit”
Next Documentary “13th” Screening Dec 4th 2017