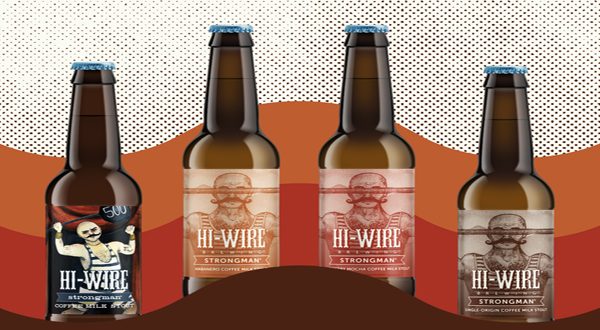 Hi-Wire Brewing will be releasing four speciality beers in November. Customers can expect one beer from their Sour & Wild Ale program, and three variants of an old fan favorite.

Hi-Wire Brewing will be releasing a Dark Berry Sour (6.9% ABV) on Saturday, November 11th at 12pm from their South Slope Sour & Wild Ale facility | 197 Hilliard Ave. Foeder aged for nine months, and with a total fermentation time of one year, Dark Berry Sour ale was brewed with raspberries, blackberries, and blueberries. With notes of dark fruit and grape jelly, this beer is reminiscent of a chocolate covered raspberry. This beer will see limited distribution the second week of November and will be on draft in both of Hi-Wire Brewing’s taprooms beginning November 11.

To round out November, Hi-Wire Brewing will be releasing a Strongman Coffee Milk Stout Mixed 12 Pack with three additional variants of the original beer. Featuring Habanero Strongman, Raspberry Mocha Strongman, Single Origin Strongman, plus the Original Strongman Coffee Milk Stout, customers will get three of each in this awesome stout mixed-pack. To celebrate the release, Hi-Wire Brewing will be hosting a Strongman Brunch, Sunday, November 19th at 10am at their Big Top location | 2 Huntsman Place. Customers can enjoy live bluegrass by the No Name Ramblers, a hearty breakfast from Foothills Local Meats, and flights or pints of the Strongman variants offered in the mixed-pack. The menu is as follows:

Located in Downtown Asheville, NC, Hi-Wire Brewing is known for producing approachable and balanced ales and lagers, most notably it’s Hi-Wire Lager, Prime Time Pale Ale, Bed of Nails Brown, and Hi-Pitch IPA. Awarded the most medals at the 2014 NC Brewer’s Cup and Best New North Carolina Brewery of 2013 by RateBeer, Hi-Wire’s award-winning beers can be found on draft and bottles in North Carolina bars and retail shops as well as in their downtown Asheville tasting room. In July 2015, craft beer drinkers can also enjoy Hi-Wire beer at their Big Top, a 27,000 square foot production facility opening in Biltmore Village, a half mile from the Biltmore Estate. In addition to flagship beers, Hi-Wire offers a rotating selection of seasonal brews as well as specialty brews from their Ringmaster's Reserve Series. Learn more about the company at hiwirebrewing.com
Previous Asheville Yoga Center Fundraises for MANNA FoodBank
Next New Mural Project on Depot Street