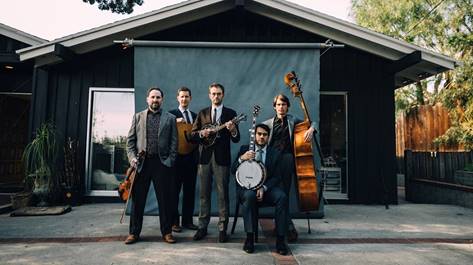 “There’s no one better at merging the past and the present.” —Rolling Stone

“An album of rich instrumentation and understated beauty that reveals deeper nuances on each and every listen … Both forward-thinking and imbued with an appreciation of the traditional sounds of America.”

Punch Brothers, who recently won a Grammy Award for Best Folk Album for their 2018 release All Ashore, begin a spring tour of the United States; label-mate Gabriel Kahane joins as special guest along the way. The tour begins at the State Theatre in Ithaca, NY on March 14, and includes shows all along the East Coast and into the Midwest, with stops in New Haven, CT; Pittsburgh, PA; Asheville, NC; Athens, GA; and more, culminating at the Savannah Music Festival on March 30. Additionally, Punch Brothers join Chris Thile’s other longtime band, Nickel Creek, for the first time on May 8 at Carnegie Hall, as part of Thile’s season-long Richard and Barbara Debs Composer’s Chair residency at Carnegie Hall.

Released last year on Nonesuch Records, All Ashore is the band’s first self-produced album and includes nine original songs written by the band. Punch Brothers’ founder, mandolinist/singer/songwriter Chris Thile, said the album is “a meditation on committed relationships in the present day, particularly in the present political climate.”

The Boston Globe said, “In these strange times, hope for the future isn’t necessarily the easiest thing to come by—but that might be why All Ashore is an album people could use right now. Punch Brothers have crafted a deeply meaningful and downright gorgeous record that takes the world for what it is, but doesn’t use that as an excuse to give up,” while NPR noted, “Paul Simon is retiring, but his sound lives on … very sharp and confident songwriting.”

This article was submitted by an awesome reader. We gladly publish user submissions. For more about the author of this particular article, we have inserted the author bio at the bottom of the content when it is provided. Submit your own article by following this link: http://ashevilleblog.com/submit-an-article/
Previous BROTHER WOLF’S MOBILE CLINIC SURPASSES 1,000 SPAY AND NEUTER SURGERIES
Next Vegan Chili competition to benefit the nonprofit animal paradise, Sweet Bear Rescue Farm