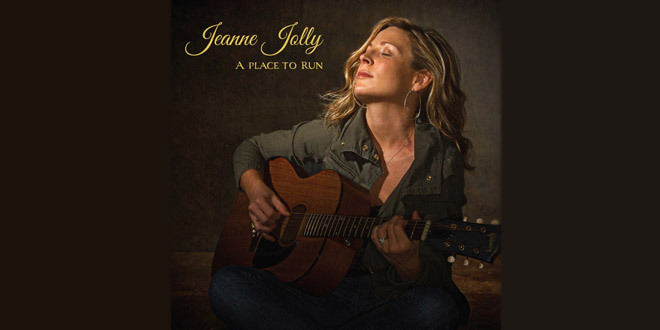 Jeanne Jolly is heading to Asheville next week and she’ll have in tow the largest band she’s ever brought — a six-piece ensemble.

“It might be crazy to do that but, we’re like ‘Let’s do it!'” Jolly said with a laugh. “Keys, pedals, guitar, bass, steel, drums and me…and we’re just going to roll in there and rock.”

The Western Carolina University alum chose Asheville as one of the cities to host an album release show for her latest endeavor “A Place to Run”. Released on Oct. 2, Jolly says her most recent album is a brave departure from her previous recordings.

“I would say that [A Place to Run] is grittier. It’s grittier than my past two, actually. I think it’s got bigger sounds on it sonically,” Jolly said. “We incorporated woodwinds this time which we have never done.

Along with the new sound, the making of the album was pretty unique as well, she says.

“We did this record all at one time in four days and four nights,” Jolly said. “It was really neat to do it that way because really that sort of record is — my producer Chris Boerner likes to say — it’s a photograph of where you are at the time.”

Although Jolly was born and raised in Raleigh, the songstress has a deep love for 828 territory.

“I feel like [Asheville] has always been a place of inspiration for me. Just growing up hiking and camping in the area and going to school at Western and coming to Asheville every weekend. It’s always fun to bring my band there. It kind of feels like it’s a full circle moment,” Jolly said.

“It’s kind of like a celebration when we come there — a party,” she added.

A Place to Run is out now. Hear it, purchase it, fall in love with it here http://jeannejolly.com/2015/08/a-place-to-run-coming-october-2/

She is excited to join the Asheville Blog team.
Previous Interview With Nelson Campbell of PlantPure Nation
Next Thanksgiving Day Feast Boxes Prepared For Families In Need