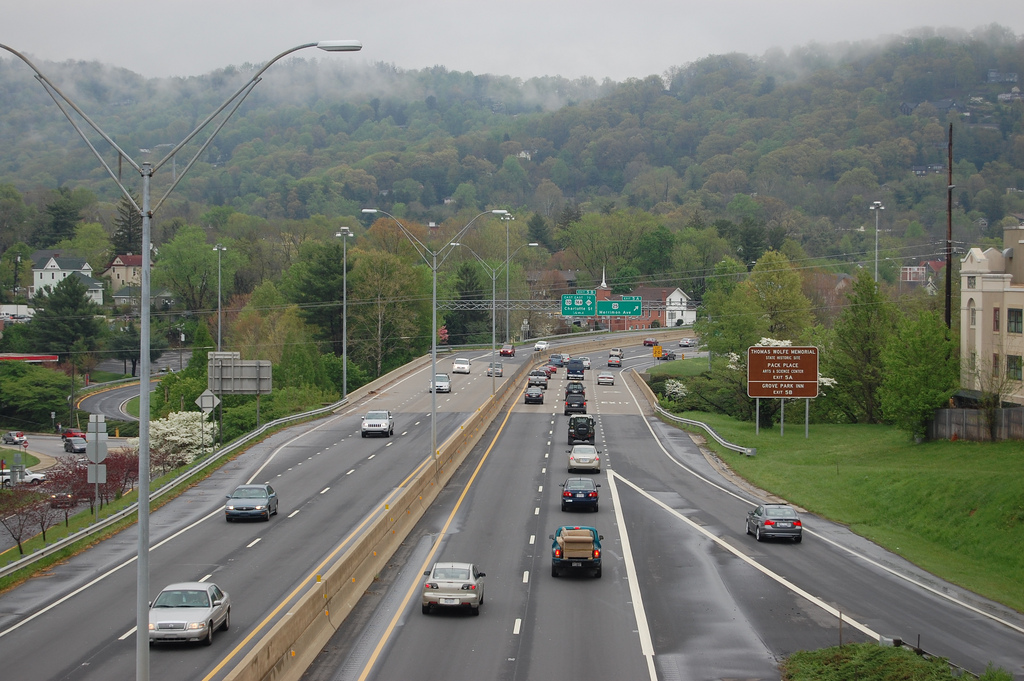 When I first moved to Asheville from Southern California, I could not believe how easy it was to get from one side of town to the other. After the standstill traffic of LA, Asheville seemed like downhill skiing: you’re almost always on the move. It often takes less time to drive from West Asheville to the Asheville Mall than it did to go fifty yards on Pacific Coast Highway on a summer day.

But not everyone enjoys my particular frame of reference. One local complained that while it used to take 20 minutes to drive from Beaver Lake to Fletcher through Pack Square, now it takes 45 minutes. There’s just no pleasing some people.

Asheville does have its pockets of traffic, and God bless you if you get stuck in one. Cars, trucks, and buses grind to a halt; the air darkens with exhaust; and tempers rise with the engine temperature.

I’ve seen I-26 backed up for five miles when some idiot — excuse me, victim — somehow went over the guardrail and landed in the trees. The towing rig had to arrange itself perpendicular to the derelict car, which meant it had to completely block all three lanes of traffic (counting the breakdown lane. Those poor drivers behind him.

So as tourist season approaches, beware those bold out-of-staters out there. They think they know what they’re doing, until the lane they’re in suddenly becomes a left-turn-only lane, and they completely freak out. Then, it’s as if the law of cause and effect doesn’t apply to them anymore.

I used to get mad at the antics of tourist drivers. But the roads of Asheville are inherently deceptive. Lanes drop off into a curb unexpectedly. Lanes merge from the left almost without warning. Traffic flows aggressively from right to left as cars try to get to left exit they need before they run out of real estate.

So I’d do what any sane person would do. I’d honk. I’d swerve. I’d endanger myself out of anger.

I don’t do that anymore. Not since a friend of mine, who I’ll call David because that’s his name, explained to me that he once executed a three-point U-turn in traffic. Someone shouted at him that he was an asshole for attempting the move. “No,” he shouted back, “I’m not an asshole; I’m just being an asshole. There’s a difference.”

Whether or not this really happened is irrelevant. What is important is that my attitude toward other drivers changed immediately. They weren’t assholes; they were just being assholes at that moment. It was a momentary lapse of reason. It was something I understood, having driven on the streets of Boston, but that’s another story.

This story is about a new attitude to take with you on the road. Instead of letting yourself get angry, let yourself be entertained. Instead of yelling at oblivious drivers, thank them. People, especially tourists, are endlessly entertaining. Laugh rather than curse. It’s healthier for you.

And don’t we live in Asheville, one of the most entertaining places to live?

Mark is a freelance writer, editor, and videographer who has spent his life playing with words and pictures. He used to think tourists were “endlessly entertaining,” but lately their driving habits have tested his patience. He writes on every subject from parking in Asheville to choosing SEO keywords. He edits fiction and nonfiction. He produces website content, including video. He’s lived in Asheville for ten years, which means he’s a third of the way to being considered a local. You can reach Mark at markhenrybloom@gmail.com or through his professional website at rayaccess.com.
Previous Asheville Sessions: Megan Jean and the KFB
Next Movie Review: Godzilla 2014