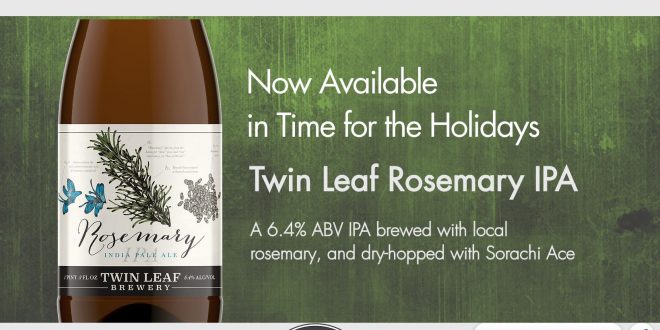 This Friday, November 9th, Twin Leaf Brewery will release their Rosemary IPA, an 6.4% ABV IPA brewed with locally-sourced rosemary and a myriad of citrus and herbal hops. This limited-time release is brewed every November to coincide with Thanksgiving and the onset of the holiday season.

Twin Leaf’s Rosemary IPA recipe was developed long before the brewery existed. Then an impassioned homebrewer, Tim Weber, now owner and head brewer of Twin Leaf Brewery, wanted to create a beer to complement the flavors of the holiday season. Drawing inspiration from the ingredients in his infamous lemon, rosemary, and thyme smoked Thanksgiving turkey, he designed a beer with strong herbaceousness and complementing citrus notes. A few years later, once Twin Leaf  Brewery opened, Weber brought this recipe to the taproom and was impressed with the warm reception it received.

“I brew this beer every year because I like to drink it with Thanksgiving,” Weber laughed. “But other people fell in love with it as well and it became a tradition. I now make it [yearly] not only for visitors to the taproom, but for our annual Thanksgiving dinner that I host at my house for brewery employees, friends and family.”

Crafted with 3 lbs of fresh rosemary sourced from Barnardsville based Rayburn Farms, Twin Leaf’s IPA is dry-hopped with Amarillo, Simcoe and Sorachi Ace. The citrus flavors of the Sorachi Ace cut through what could otherwise be overwhelming herbaceous flavors of rosemary. Due to its yearly warm reception,  the Twin Leaf Rosemary IPA has become a seasonal staple of Twin Leaf’s rotating draft list.

Starting at 2pm on Friday, the Rosemary IPA will be available for purchase in 500ml bottles and on draft at Twin Leaf Brewery’s taproom located in Asheville’s South Slope on Coxe Ave. Bottles can also be found in a number of local bottle shops, restaurants, and retailers in the surrounding area.

Twin Leaf Brewery is a new brewery to the Asheville Scene. They took up residence on Asheville's up and coming South Slope, and have served the area well. Dog friendly, Twin Leaf Brewery has a lot to offer.
Previous Menu Announced for Nature’s Craft Beer Dinner at Catawba Brewing
Next Santa Comes to Asheville Outlets + More