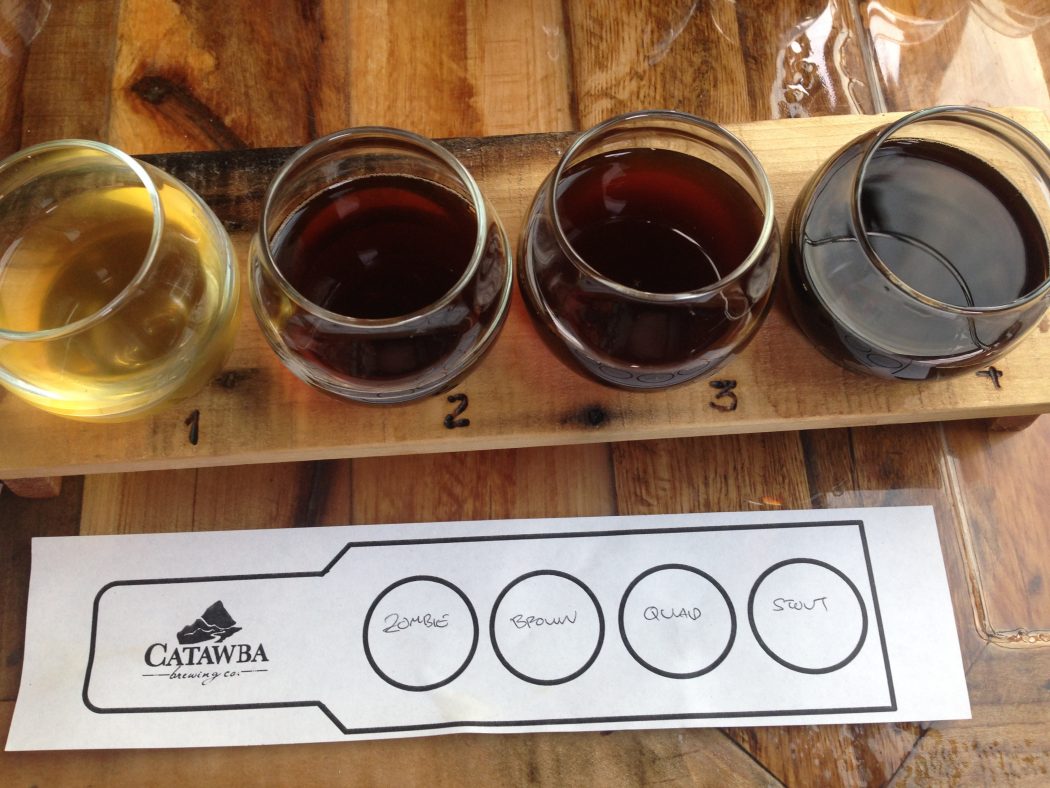 A Taste of Catawba’s New Brewery

Beer has been flowing at Catawba’s new South Slope tasting room since their soft opening on Tuesday, but I decided to head over for the grand opening on Friday April 3rd, which included specialty beers, live music, and a food truck.

The space is large and airy, with rustic wooden tables and chairs. They’ve definitely created a fun atmosphere to hang out and listen to music in. They also have two bars inside, a larger front bar, and a smaller back bar. They had 24 taps with their usual offerings of Peanut Butter & Jelly time, White Zombie, and Firewater IPA at the front bar, but I grabbed a flight at the back bar of four of their specialty barrel aged beers: Sour Zombie, Brown Bear Bourbon Barrel Aged, Blueberry Stout and a Belgian Quad. At $8 a flight (for either 8 of their regular beers or 4 of their specialty beers) Catawba has one of the lowest priced flights in town. I was excited to try some of their more experimental brews, since Catawba has yet to impress me with any of their flagship beers.

Out of the four I tasted, the Belgian Quad was the most impressive. You could certainly taste the wine barrels it had been aged in, and the 14.4% ABV was hidden well with a smooth mouthfeel and a syrupy sweetness. The weakest of the bunch were the Sour Zombie, which had only the faintest tartness, and the Brown Bear Bourbon Barrel Aged, which had a thin mouthfeel. The Blueberry Stout was one I was quite curious to try, since many blueberry stouts fail to deliver a true blueberry flavor (as many of them are either made with extract or simply not enough blueberries). Catawba did manage to coax a strong blueberry flavor out of the stout, but it did taste slightly artificial. Overall, I’m glad I had the time to check out their new space and I’m eager to see more experimental beers from them in the future.

Catawba’s new brewery and tasting room is located at 32 Banks Avenue. It will be open Monday-Thursday 2pm-10pm, and Friday-Sunday noon-10pm.

Her other hobbies include thrift shopping and baking with beer.
Previous Overheard in Asheville: Sears Leaving Asheville Mall
Next Bonfire Barbecue Set to Open in West Asheville