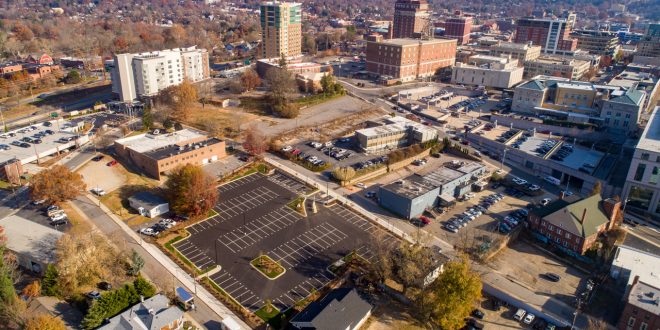 Narvel James Crawford is pleased to announce the reopening of Carter Street Parking in downtown Asheville. Crawford is an Asheville native of 90 years. Jim, as he is known to his friends, has owned and operated parking around the western end of downtown Asheville for many years. His mother, Thyma Phillips Crawford, a legal stenographer who once worked for F. Scott Fitzgerald, ran the parking lots before him.

Jim has always loved Asheville and invested himself heavily in our city and our state. An alumnus of Duke University and the University of North Carolina at Chapel Hill, he served in the United States Army Counterintelligence Corps following World War II, prior to a successful publishing career in New York City.

Returning home when his father (Judge Narvel James Crawford, Sr.) became ill, Crawford took a leap of faith and ran for and won a seat in the North Carolina Legislature, where he served from 1981 until 1995. Crawford also held positions as the Director of the Asheville Chamber of Commerce, North Carolina Hemophilia Foundation, American Foundation for the Deaf, Epilepsy Foundation of North Carolina, and the American Lung Association.

At 90 years of age, Jim is still going strong! He recognized Asheville’s need for quality parking, and decided once again to invest in his home town. He, along with Clayton Ryan, a Beverly-Hanks real estate agent have developed this personal project with enthusiasm. They not only repaved the lot, added wider sidewalks and landscaping, but also added steel fencing all around, professional lighting, and 16 security cameras.

“We are very pleased,” says Crawford, knowing that his Mom, who managed the lot before him, would be proud too. The lot will offer 125 spaces for monthly business parking (Monday through Friday 6 am to 6 pm), and hourly or event parking during nights and weekends.

This article was brought to you by one of our awesome staff writers. Some of our writers don't want the fame and glory that comes along with being awesome, so we respect their privacy. Want to tell them how good their work is? Write a comment below and leave them some love!
Previous Just Announced: Old North Premium Lager
Next Steep Canyon Rangers Collaborate with Asheville Symphony