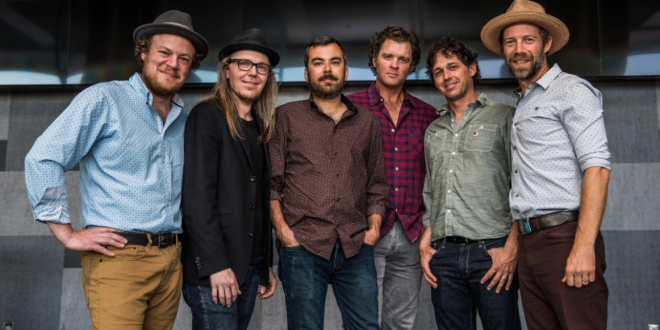 Steep Canyon Rangers – Asheville, North Carolina’s GRAMMY winning perennial Billboard chart-toppers – released one of 2019’s most unexpected cross-genre collaborations, teaming up with Philadelphia soul legends Boyz II Men and the Asheville Symphony for “Be Still Moses.” With a refreshingly unconventional lineup, the track was praised for its “sublime harmonies and soulful ad-libs” by Rolling Stone, featuring an effortless blend of SCR vocalist Woody Platt’s sonorous, bluegrass-flavored baritone with the lush string arrangements of the Asheville Symphony and the timeless vocal harmonies of Boyz II Men.

Now, Steep Canyon Rangers and the Asheville Symphony are expanding the collaboration with an 11-song album of the same name; Be Still Moses arrives March 6 on Yep Roc Records. Featuring beguiling reworks of hits and rarities from Steep Canyon Rangers’ illustrious career, the collaborators share a fresh take on “Radio,” the IBMA Song of The Year-nominated title track from the band’s 2015 #1 Bluegrass album.

Listen to “Radio” and pre-order Be Still Moses here: lnk.to/bestillmosesalbum

Ultimately a celebration of Asheville’s thriving and diverse musical community, the roots of Be Still Moses stem back half a decade to a conversation between Asheville-based music producer Michael Selverne, Jessica Tomasin (of Echo Mountain recording studio) and David Whitehill, the executive director of the Asheville Symphony. The trio had an idea to break down the barrier between the orchestra and Asheville’s world-class roots music scene, bringing the musicians together for one-of-a-kind collaborations while forging even closer bonds within the city’s tight-knit artistic community. The successful experiment reaches its natural next step as the Symphony pairs with perhaps Asheville’s best-known musical exports for a full-length album. With Selverne producing, the collaborators reimagine work throughout the duration of SCR’s chart-topping, award-winning career – from 2007’s “Call The Captain” through 2018’s “Let Me Out of This Town.”

“It was such a cool yet unusual experience to work as a band on a collection of songs we’ve recorded over the years and have performed live hundreds of times, by adding the Asheville Symphony and producer Michael Selverne,” says Steep Canyon Rangers’ Woody Platt. “This brought the songs to a new place with an entirely new life and sound. We also recorded with the band in a truly live setting to capture the energy of the performance.”

“In 2015, I met David Whitehill, ED of the Asheville Symphony, who wanted to integrate the symphony with the larger Asheville music community by creating recording project for the symphony involving local musicians outside the classical community,” says Selverne. “We approached Woody [Platt] at Mountain Song Festival that year and he and the guys were onboard and eager. Woody and I spent a lot of time going back and forth about arrangements, arrangers and repertoire. The ease with which the Rangers deliver their music is deceptive because the guys are deeply talented and uniquely so. Messing with that is a daunting task but I still believed that the band could speak differently and still retain their character.”

This article was brought to you by one of our awesome staff writers. Some of our writers don't want the fame and glory that comes along with being awesome, so we respect their privacy. Want to tell them how good their work is? Write a comment below and leave them some love!
Previous Carter Street Parking Reopened Downtown Asheville
Next Riveter Hosts Opening Day Thrown Down