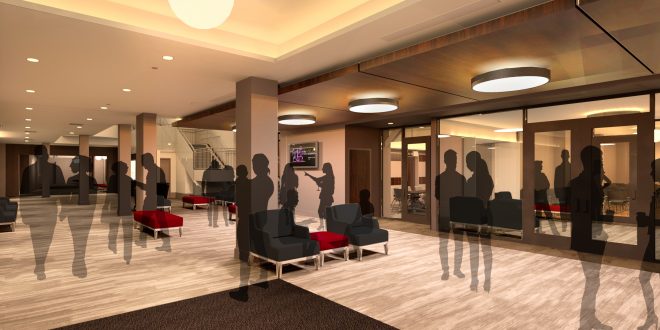 The newly expanded lobby will receive flooring and furniture upgrades, as well as an improved concessions area across from the new Henry LaBrun Studio. Architectural rendering courtesy of Clark Nexsen.

In January 2019, construction began at the current Diana Wortham Theatre — transforming the single-stage entity into a three-venue performing arts complex. The new Wortham Center for the Performing Arts will open in September 2019, with a grand opening celebration to coincide with the beginning of the theatre’s 2019/2020 Mainstage season.

The new Wortham Center for the Performing Arts will comprise three venues: the existing 500-seat Diana Wortham Theatre, with an improved sound system, hearing assistance technology and energy efficient LED lighting; the new Tina McGuire Theatre, a multiuse black box theatre with comfortable, tiered seating for 80-100 people; and the new Henry LaBrun Studio, a multiuse space for classes and events, to be used as a classroom by day and a performance venue, seating 60-80 people, by night.

“Diana Wortham Theatre has always been a place for the arts (and arts audiences) to grow,” said Rae Geoffrey, managing director of the theatre. “By expanding from one to three venues, the organization will be able to offer new and diversified programming, reach new audiences and deepen relationships with existing audiences, artists and local companies.”

The new spaces, the Tina McGuire Theatre and Henry LaBrun Studio, were named to honor two longtime patrons of Diana Wortham Theatre — both of whom have been integral to the theatre’s growth throughout its 27-year existence.

“Tina McGuire is a lifelong arts advocate, supporter and founding member of Diana Wortham Theatre,” Geoffrey said. “Whether building sets, serving as an interim director, leading the Board or supporting from her seat in the house, Tina’s work and dedication helped make Diana Wortham Theatre what it is today.

“Henry LaBrun,” Geoffrey continued, “is a dedicated supporter of Diana Wortham Theatre, who has helped advance the mission of the organization for many years through his passionate patronage and gifts.”

The original theatre’s namesake, Diana Wortham, continues to make contributions that “make the work of this theatre possible,” Geoffrey explained. “Because of her key role in the formation of the original organization and her generous support kick-starting the successful Next Stage capital campaign, we’re proud to open the Wortham Center for the Performing Arts in her name.”

In 2015, the Diana Wortham Theatre launched The Next Stage capital campaign to fund this transformation into the Wortham Center for the Performing Arts, raising more than $3.1 million toward that goal.

By adding two new venues in addition to its existing stage, the Wortham Center for the Performing Arts is poised to meet the needs of the broader community better than ever before, allowing increased access to programming, development of new community partnerships, added educational offerings and space rental services to our community.

In addition to the two new performance venues, the project includes the construction of new offices to house the theatre’s growing staff, an upgraded lobby with expanded seating, and a new concession area.

The transformation also includes a renovation of the Wortham Center’s main entrance and courtyard off Biltmore Avenue. Redesigned and streamlined, the outdoor entrance will transform into a gathering space with a busker stage, seating areas for patrons, designated dining areas for White Duck Taco and Marble Slab Creamery and an additional access area to the Henry LaBrun Studio.

The Wortham Center for the Performing Arts will officially open in September 2019 at 18 Biltmore Avenue. Individuals or organizations interested in booking any portion of the center for a future event should contact Operations Manager Tiffany Santiago at (828)210-9850 or tiffany@dwtheatre.com.

In the heart of the Pack Square Cultural District is the city's finest theatre, the Diana Wortham Theatre: an intimate 500 seat theatre inside the Pack Place complex, with convenient off-street parking and numerous downtown restaurants within a block of the theatre. Diana Wortham Theatre offers live performances of music, theatre and dance throughout the year by nationally touring artists (the Mainstage Series) as well as a wide array of performances by professional and avocational regional arts groups.
Previous Asheville Humane Society Announces Tracy Elliott’s Departure
Next APRIL 2019 SECOND SATURDAY in the RIVER ARTS DISTRICT 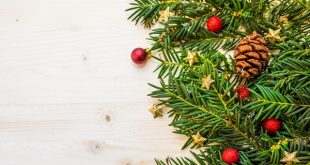