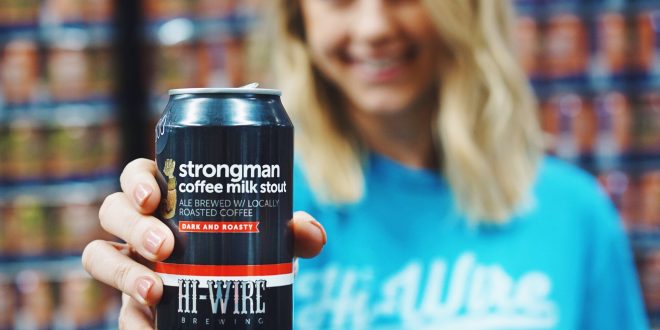 Beer is good. And beer that does good is even better. That’s why on Friday, Feb. 7, Hi-Wire Brewing is donating 100% of proceeds from every glass of Strongman Coffee Milk Stout to support the strong men and women in Australia who are working to fight fires, repair homes, heal people, and rescue wildlife from the devastating bushfires that have been raging across the continent over the past few months. Nearly 25 million acres – an area a little smaller than the state of Tennessee – have been burned and more than a billion animals have been killed in these fires, but unfortunately, they’re not yet fully extinguished. Shocked and heartbroken, Hi-Wire wanted to do its part to provide relief, so it joined forces with 10+ North American breweries for the #BEERFORBUSHFIRERELIEF event coordinated by Brunswick Beer Collective out of Australia. All four Hi-Wire Brewing taprooms – Asheville Big Top, Asheville South Slope, Durham, and Knoxville – will be participating in the event, and donations raised will be distributed evenly between the Australian Red Cross and Wildlife Victoria.

Hi-Wire believes that impacting its community and world goes far beyond simply producing great beer. The Asheville-based brewery strives to be a positive force by supporting causes like Manna Food Bank, Friends of the Smokies, Green Built Alliance, and Pink Boots Society along with many other important initiatives. With the help of its amazing fans, Hi-Wire Brewing was able to donate $17,644.84 in 2019 through a combination of non-profit taproom nights, sponsorships, beer donations, and event space donations. Hi-Wire’s donations total nearly $60,000 since opening in 2013.

Located in Downtown Asheville, NC, Hi-Wire Brewing is known for producing approachable and balanced ales and lagers, most notably it’s Hi-Wire Lager, Prime Time Pale Ale, Bed of Nails Brown, and Hi-Pitch IPA. Awarded the most medals at the 2014 NC Brewer’s Cup and Best New North Carolina Brewery of 2013 by RateBeer, Hi-Wire’s award-winning beers can be found on draft and bottles in North Carolina bars and retail shops as well as in their downtown Asheville tasting room. In July 2015, craft beer drinkers can also enjoy Hi-Wire beer at their Big Top, a 27,000 square foot production facility opening in Biltmore Village, a half mile from the Biltmore Estate. In addition to flagship beers, Hi-Wire offers a rotating selection of seasonal brews as well as specialty brews from their Ringmaster's Reserve Series. Learn more about the company at hiwirebrewing.com
Previous Brother Wolf Animal Rescue Offers Puppygrams in Asheville on Valentine’s Day 2020
Next Catawba Brewing Hosts Kick Off Party for White Zombie 5k