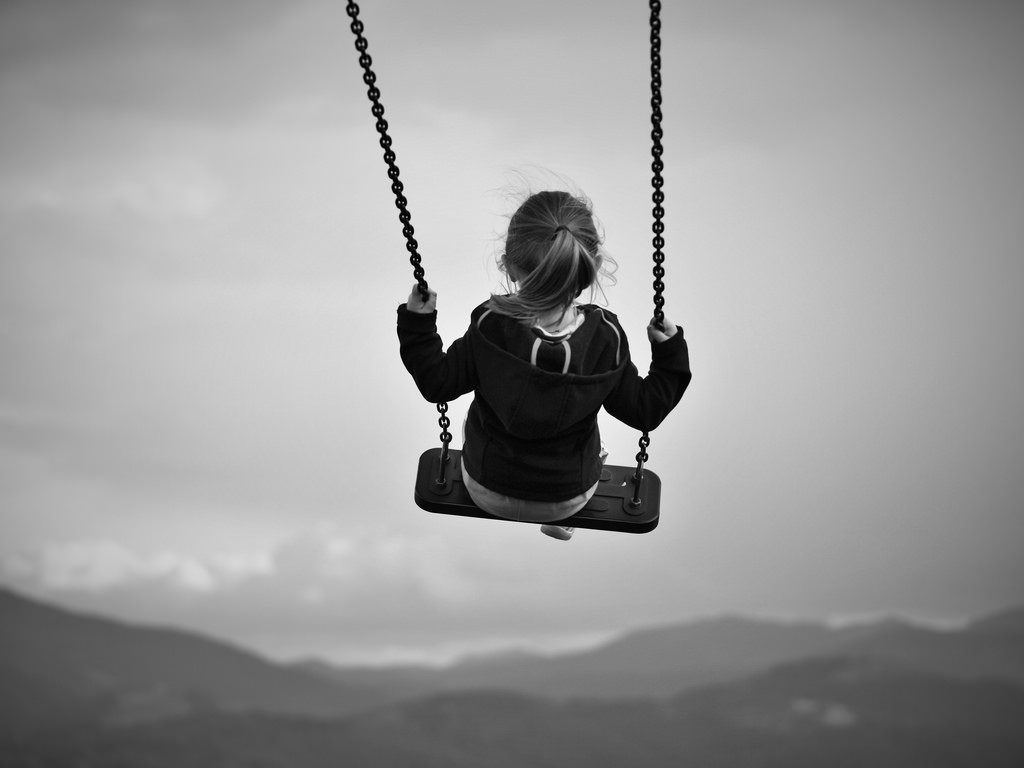 There is a huge push in our society to raise children, especially here in the South. Most women are born and bred to go to school, get married, and have children – in that order. Sometimes I feel like we have been raised in such a society that you may not realize that you have been predestined for a certain track in life, and you don’t question that trail – you just take it. Being a mom is often proclaimed to be the most important job in the world – and I’m not here to dispute that fact. Without my own parents, my mom especially, I would not be here today. However, just because my parents made the decision to procreate and bring another child into this world, does not mean that I have any obligation to do so myself. 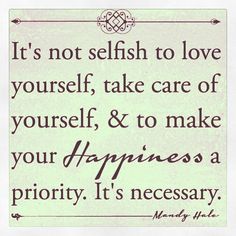 I’ve been seeing a lot of comments lately about being a parent. Being ‘that age’ I suppose it is a natural progression that many of my peers are having kids – be it their first child or their third. I don’t begrudge anyone their choice in life – I know many wonderful couples that will raise equally wonderful children. However, a certain cloud lingers over the single/parent relationship, and many non-parents judge parents. Interestingly enough, I’ve been on the receiving end of a number of judgements myself – for choosing to remain childless! I wanted to address the main judgement here today.

I’ve been told that choosing to be childless is selfish. That my reasons, whatever they may be, are at their root selfish in nature and that I should give up a part of myself to bear children. Now, as a women that seems a bit archaic in my eyes, but beyond that… it amazes me that in our current day and age, and even yes, here in the South (what I consider a progressive part of the South, even), such pressures are put on women like myself. Let me strip down this argument a bit, because it helps me to process things by talking them out.

I’ve been told I’m selfish for not wanting children.

My first point – how am I selfish to realize that I am not well equipped to have children? Be it emotionally, physically, or psychologically, there is just something that I don’t have in me to want to bear children. I may ask – would it not be more selfish of me to have children, knowing that is simply not my calling? I could argue that I simply know myself well, and am sparing any future offspring the future of living with a parent who may never be able to fully handle being a parent.

My second point is simple a question that comes to mind every time I hear this argument. “If choosing to not have kids is selfish, how is having children so entirely selfless?” Why does one have a child? Ultimately and biologically – emotions aside- we have children to carry on our genetics in the hopes that our future generations will be even better than what we are at today. The purpose of running this rat race is so that we can theoretically exist far and long into the future – and at that core, isn’t that inherently selfish? To think that my genetics, your genetics, his genetics, her genetics, are so vastly superior to another human beings, that we must be fruitful and multiple, because the world needs our offspring. That seems like a bit of twisted logic, if you ask me.

The third point – why is it selfish for me to take a different path in life? We don’t call single people who aren’t interested in getting married selfish – so why should we assign that term to people who aren’t willing to have children? My lot in life is different than your lot – and if you want to have kids, that is awesome. I’m super happy for you, and I’ll make sure to buy Junior a stuffed animal. But your need in life or what you feel is your calling does not dictate what I want to do in my personal life. Just because we have a difference in opinion doesn’t mean that one of us is right and the other is wrong. 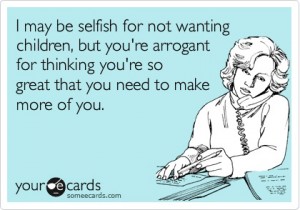 There is a term I’ve seen online floating around quite a bit – it’s called ‘mommy martyr’. Unfortunately I think that term can be correctly applied to people who have this vision that all non parents are selfish individuals. You choose to be a parent, and that works for you. However because you are a parent you also chose to forgo a lot of things – personal space, finances, perhaps friendships, and more. If someone chooses to not walk down that same path, I don’t consider it fair for the childless to be compared to the child baring. It is a lot like pushing your religious beliefs on someone – you believe one way, they believe the other. Is that other individual selfish for choosing to take a different spiritual path than you? Do they have strong reasons for why they believe what they do? Are they following their path despite persecution and judgement from the other side? Mommy martyrs seem to believe that because they chose to have children, that is the only way – much like a devote religious follower believes that their belief set is the only way one will get into heaven.

Everyone has the ability to follow their own path in life. Childless or child filled, the only thing that matters is that each person is happy and fulfilled. If we don’t see eye to eye on subjects – that is ok. Agreeing to disagree is a wonderful thing, and won’t make the other party feel any less. But let’s be adults about this, ok?

The sooner we recognize that it is selfish to proclaim that someone is selfish for not wanting to fit your ideality, the better.

This article was submitted by an awesome reader. We gladly publish user submissions. For more about the author of this particular article, we have inserted the author bio at the bottom of the content when it is provided. Submit your own article by following this link: http://ashevilleblog.com/submit-an-article/
Previous Things To Do In Asheville June 25th: Geek Edition
Next Asheville Sessions: Marmalakes 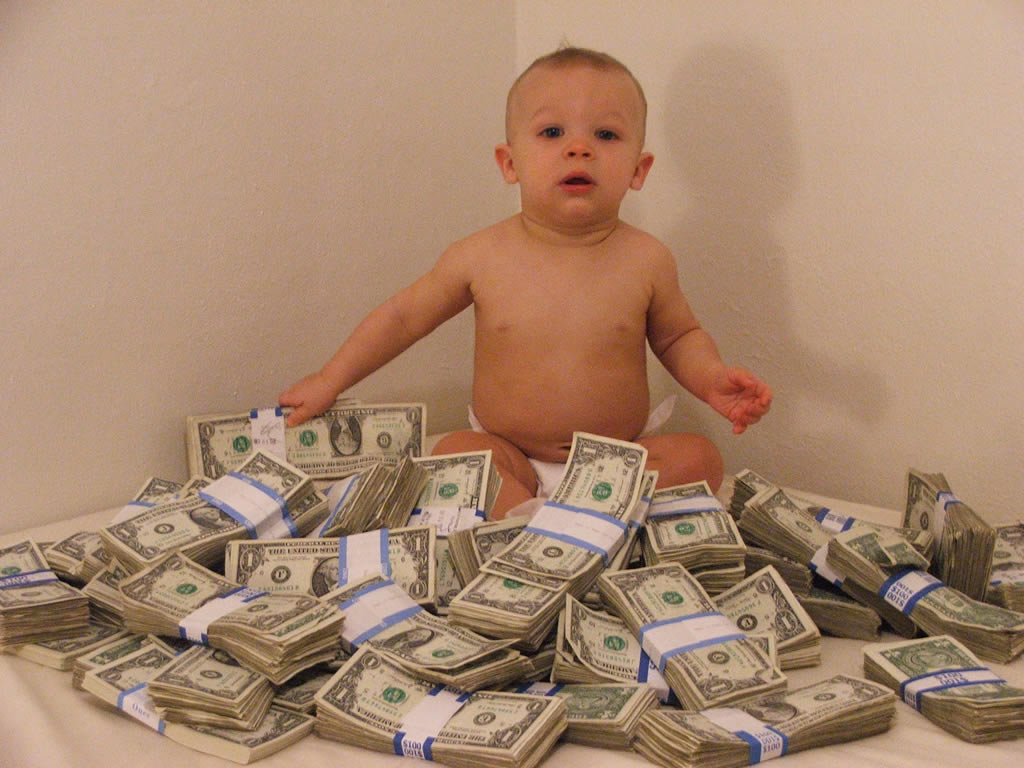 15 Reasons To Not Have Children 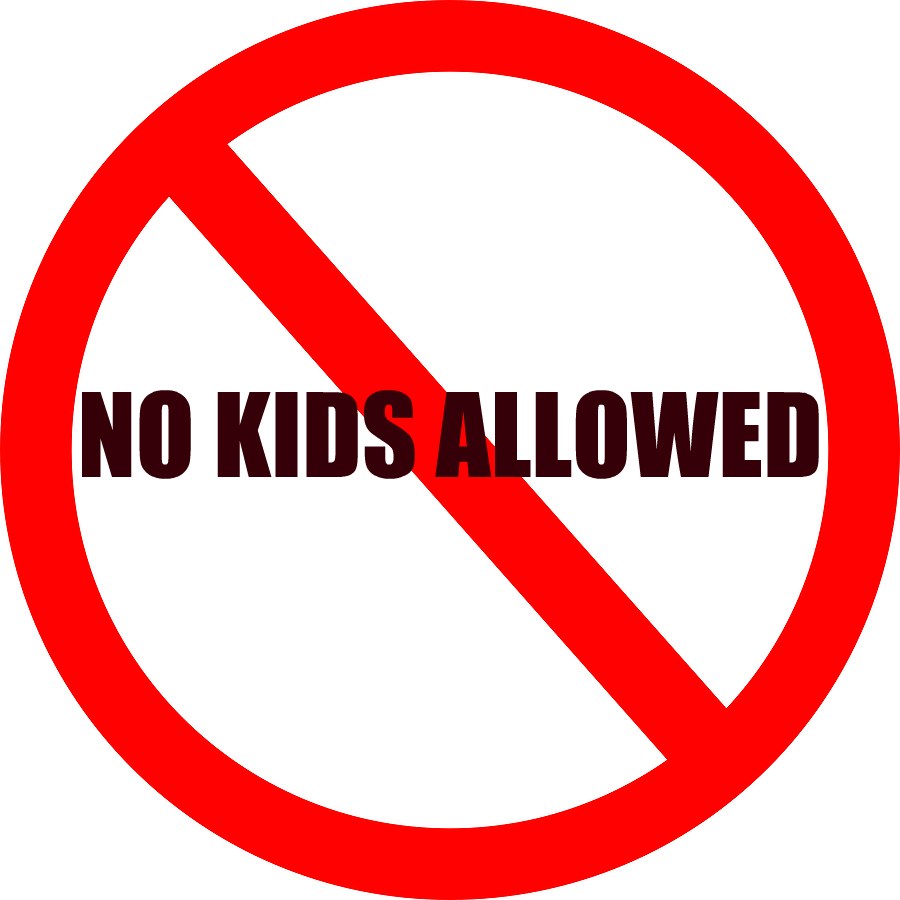