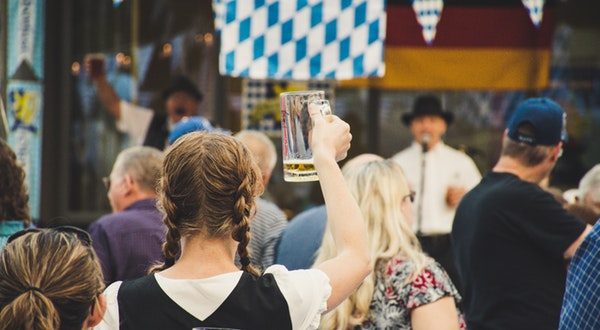 Award-winning Asheville beer bar The Whale:: A Craft Beer Collective puts its distinctive spin on a German tradition with its second-annual Oktoberfest on Saturday, October 5th from 3-7 p.m. The festivities include a rotating draft list of German and American lagers alongside games, contests, and giveaways, all crafted to honor longstanding volksfest celebrations.

“The Whale represents a fusion between new, trending beer and old-school world beer,” explains Whale co-owner Andrew Ross. “So this is one of our biggest days to celebrate some of our favorite classic German beers — and have a big party.”

The day starts with a full twenty-tap takeover showcasing German lagers and American beers inspired by old-world märzens, running the gamut from familiar favorites to rarities never before poured in the Asheville market. New offerings will be available periodically as kegs kick, including a special gravity keg to be tapped on the bar. Oktoberfest staples such as Ayinger and Paulaner will pour alongside less commonly available breweries like Zehendner and Weissenohe, with American breweries such as Fonta Flora and Grimm representing the US craft beer community’s take on centuries of German brewing tradition.

I’m super excited about the diversity of the lineup this year, both in terms of classic German beers and contemporary American stuff,” points out co-owner Jesse Van Note. “Oktoberfest is the quintessential celebration of beer, and we want The Whale to be the best expression of how people engage with beer, so I’m stoked that we can present such a full spectrum event.”

Festival sponsor Ayinger will be giving away collectable merchandise, including free steins for the first forty customers to purchase a full stein-pour of Ayinger Oktoberfest. Games and contests, including a stein holding competition, das boot chug, pretzel toss, stein race, and a yodeling competition, are scheduled to kick off at 4 p.m. and run hourly, with prizes for all winners.

A German-inspired food menu will be available from neighboring Haywood Common restaurant, and the Oktoberfest tap list will be available until supplies are exhausted. For a full tap list and schedule of events, visit https://www.facebook.com/TheWhaleAVL/. As always, families and pets are welcome, as are costumes — lederhosen and dirndls encouraged but not required.

About The Whale:: A Craft Beer Collective

While Asheville is known for it’s amazing local breweries and craft beer scene, longtime locals Andrew Ross and Jesse Van Note felt that the community needed a craft beer bar serving the best craft beer from all over the world. Having worked in the beer industry together for many years, they decided to venture out on their own and make it happen.The idea for The Whale :: A Craft Beer Collective was born: a tasting room for people to come together to enjoy sought-after beers, otherwise known as “Whales”, as well as other fine beverages such as wine, cider, mead, and sake.

This article was brought to you by one of our awesome staff writers. Some of our writers don't want the fame and glory that comes along with being awesome, so we respect their privacy. Want to tell them how good their work is? Write a comment below and leave them some love!
Previous Burial Beer’s Forestry Camp Opens Sept 27 2019
Next Hi-Wire Brewing Expands Distribution to Alabama