Home » Entertainment » Warren Haynes Presents: The Annual Christmas Jam is One of Our Favorite Happenings in Asheville 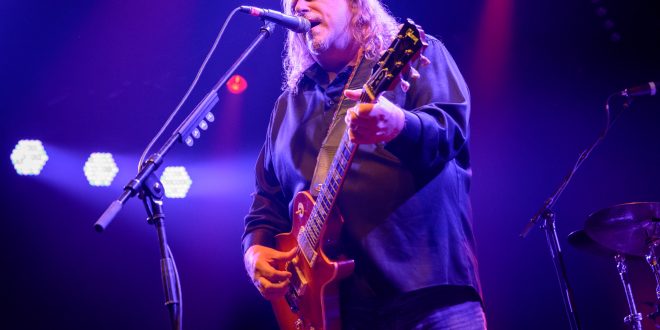 Warren Haynes Presents: The Annual Christmas Jam is One of Our Favorite Happenings in Asheville

Would Santa ever visit Asheville without Christmas Jam popping off? We haven’t had to test the possibility in 28 years, and hopefully, it’s a long time coming before such a tragedy would occur. Organized by Grammy Award-winning vocalist, songwriter, renowned guitarist and Asheville native Warren Haynes, The Annual Christmas Jam concert has a rich story behind it. It all began in 1988 when Haynes decided to give an opportunity for performing artists, fans and donors to come together through music and contribute to the Asheville community at large.

The first concert in the annual holiday series was held at the long-defunct club 45 Cherry in downtown Asheville on December 22, 1988. Billed as “The Christmas Jam: Musician’s X-Mas Reunion”, Haynes assembled a close-knit group of musician friends and associates to raise money for local causes.

The event has grown in stature and reach over the years, drawing impressive arrays of performers and a widening attendance. Once club-sized venues could no longer accommodate the crowd, The Christmas Jam graduated to the Thomas Wolfe Auditorium and eventually to the Asheville Civic Center, now the U.S. Cellular Center since 2001.

For the past 18 years, proceeds from The Annual Christmas Jam have benefitted Habitat for Humanity, a non-profit, charity NGO that’s centered on and devoted towards eradicating issues concerning poor housing worldwide. The organization is focused on building as many simple, decent and affordable houses worldwide as possible.

Through this partnership, more than $2 million has been donated to Habitat for Humanity over the years. Haynes and his wife Stefani, together with musicians from a wide variety of genres, donors, sponsors and the fans who attend The Annual Christmas Jam have built homes for 61 families and counting. Proceeds have also gone toward the Asheville Area Habitat for Humanity’s Hudson Hills subdivision where the 2014 and 2015 Christmas Jam houses are located.

The artists who have made Warren Haynes’ mission a success include his own bands Gov’t Mule and The Allman Brothers Band, The Revivalists, The Avett Brothers, the Steve Miller Band, Sheryl Crow, Dave Matthews, Peter Frampton, John Paul Jones, Ray LaMontagne, The Doobie Brothers, the Tedeschi Trucks Band and countless others.

The opportunity for artists from diverse backgrounds of music to entertain fans with surprise collaborations is one of the most special aspects of The Annual Christmas Jam. You never what performers will pop up and sit in on another performer’s set. All the while, Haynes presides over the festivities like a master of the card table, laying the wildcards down for the full spectacle of his audience.

Plenty of special guests have also shown significant support for this cause, participating both in performances and with generous financial gifts. Every year, The Annual Christmas Jam seems to get bigger and better than the last with more people contributing and more families being given homes. This year marks the 29th installment of the Annual Christmas Jam, which is slated for December 9, 2017, at the U.S. Cellular Arena. The full lineup of performers is expected to be released soon.

This article was brought to you by one of our awesome staff writers. Some of our writers don't want the fame and glory that comes along with being awesome, so we respect their privacy. Want to tell them how good their work is? Write a comment below and leave them some love!
Previous A Future Without Chocolate? Terrifying!
Next Haymaker Pop Up At New Barrel Room At Catawba Brewing Charlotte