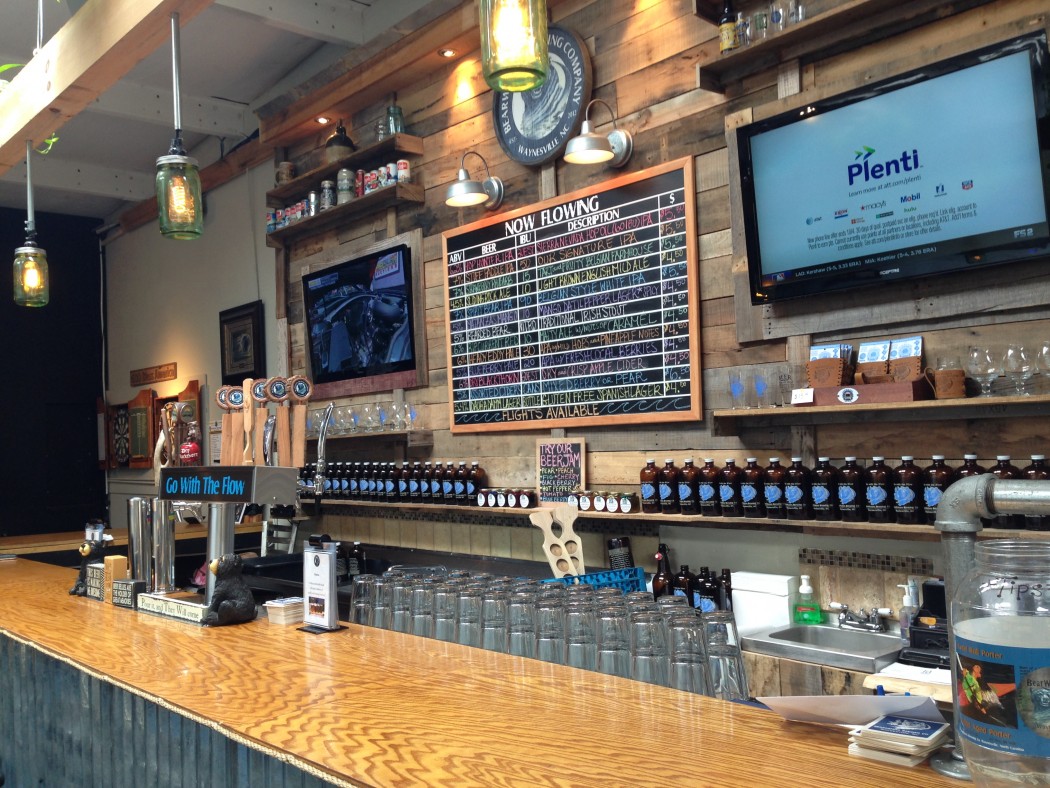 A Taste of Waynesville Breweries

When you live in a place like Asheville, where amazing breweries and beer bars are on almost every corner, you sometimes forget that there is beer outside of the city. I have decided to take it upon myself to visit as many of the “day trip” distance breweries as I can and report back to you. Last weekend I had the chance to go to Waynesville, NC (about 30-40 minutes west of downtown Asheville) where I selected four breweries to visit: Boojum Brewing Company, Tipping Point Tavern, Frog Level Brewing Company, and BearWaters Brewing Company. 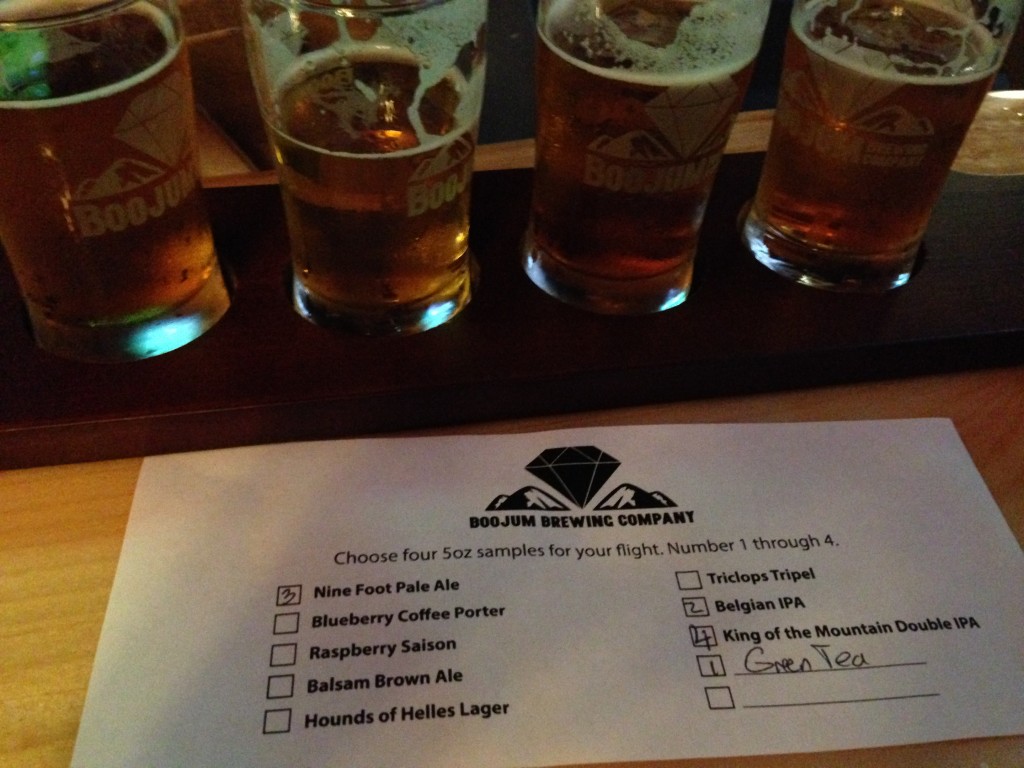 Boojum Brewing Company was my first stop, and the only brewery I had ever previously tasted beers from before. When I walked into the taproom on a Friday night around 9pm, there was a decent crowd and quite a few of the patrons were engrossed in the soccer game on TV. The first thing I noticed was that the bartenders were incredibly attentive and friendly, even though the bar and most of the tables were full. The bar featured 10 of their own beers on draft, a few guest taps in a variety of styles, bottled beer, and an extensive liquor selection.

In fact, almost half of the customers that evening were drinking liquor instead of beer. I, however, ordered a flight that included the Tropical Green Tea Pale Ale, Belgian IPA, Nine Foot Pale Ale, and King of the Mountain Double IPA. Out of those four, the King of the Mountain was my favorite, with a good hop bite, and the 8.7% ABV was well hidden. The Green Tea, although refreshing, was lacking in the tea department. I had also previously tried their Raspberry Saison (which to me, lacks raspberry flavor), and their Blueberry Coffee Porter (which is by far my favorite Boojum beer).

The food menu has a good mix of “bar food” (burgers, wings, and various beer battered items) and lighter items like salads, cheese plates, and hummus. I ordered The Smokin’ Veg sandwich, which had smoked Gouda and brussel sprouts on it (I can’t say no to brussel sprouts…). The sandwich ended up being overloaded with hummus though, and that was really all I could taste.

Overall, Boojum gets major points for their super attentive servers, and they make some solid, true to style beers.

Boojum Brewing Company’s Taproom is located at 50 N. Main St. in Waynesville and is open 12-10 Monday, Wednesday, and Thursday, 12-12 Friday and Saturday, and 12-9 on Sunday. 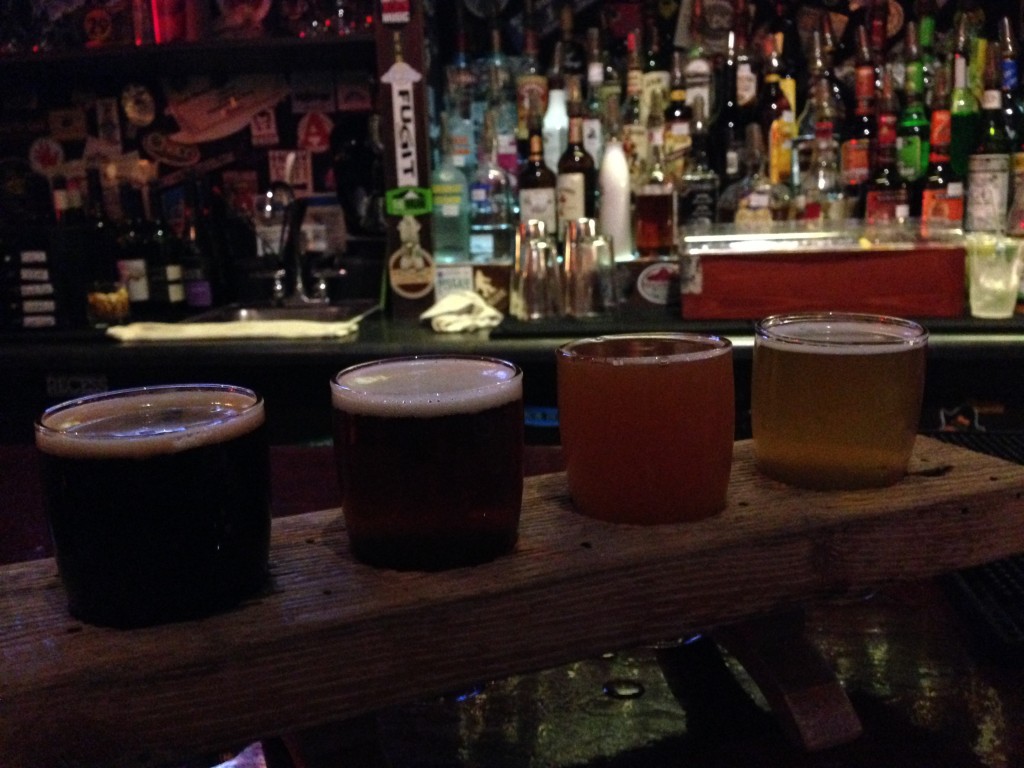 My next (and final stop) that evening was Tipping Point Tavern. I had previously been warned by people not to go here, but I wanted to give them a chance. When I arrived around 10:30pm the bar and the tables were packed and the volume level was quite loud, but I managed to squeeze my way into a seat at the bar. I asked the bartender for a flight ($5.50), and selected the Plott Hound Porter, Chunky Gal Amber, Punch in the Face IPA, and the Belgian Tripel. Out of the four, the Punch in the Face IPA was the best, with a strong pineapple/tropical fruit flavor and a decent hop bite. The other three were left unfinished. I spent about 45 minutes inside, and in that time I never witnessed the bartender pour a Tipping Point beer for any other customer. PBR and liquor seemed to be the beverages of choice for the clientele, and it was clear that people did not come to try Tipping Point beers, they came to get drunk.

Overall, the atmosphere, the service, and the beers left a bad taste in my mouth.

Tipping Point Tavern is located at 190 North Main Street and is open Monday through Thursday 11:30-midnight, and 11:30-1am Friday and Saturday. 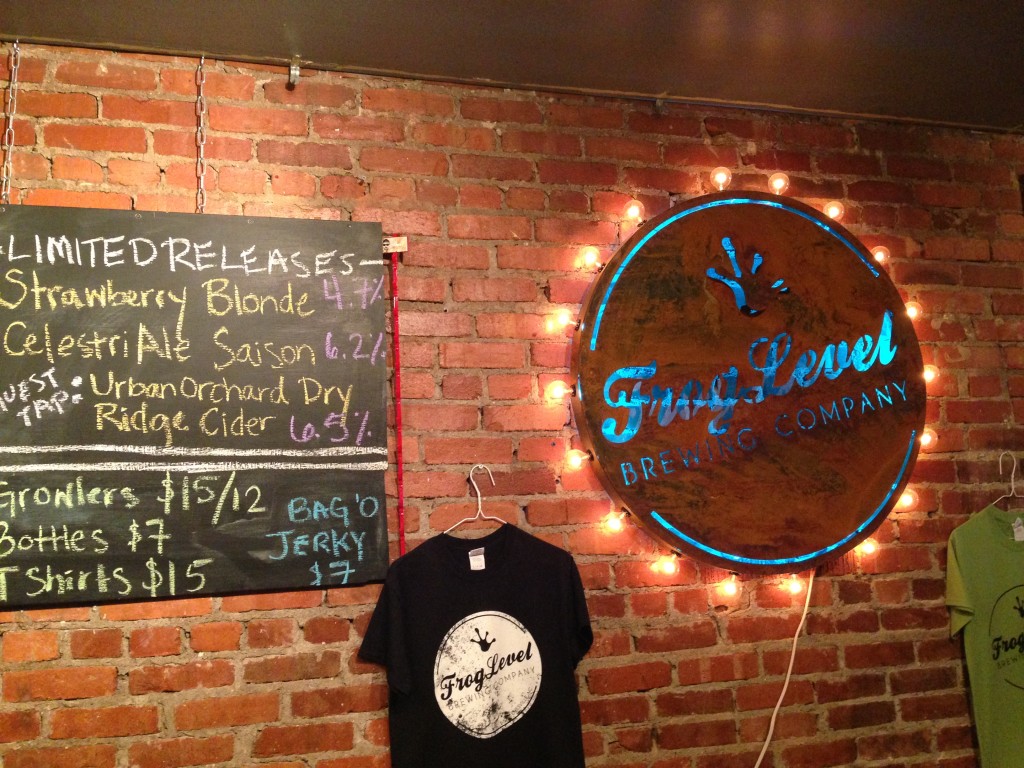 On Saturday, I went to the remaining two breweries on my list: Frog Level and Bear Waters. I showed up to Frog Level right after lunch and ordered a flight ($5) of all five beers they had on tap. The flights, samples, and full pours are all poured into plastic cups which seems like a huge waste of money to me, but perhaps they don’t want broken glass in their outdoor area.

The flight included the Strawberry Blonde, Salamander Slam IPA, Celestriale Saison, Catcher in the Rye, and the Nutty Brewnette. I enjoyed all five of these beers, especially the Salamander Slam IPA and the Nutty Brewnette. The Strawberry Blonde also had a bold strawberry flavor, paired with a spritzy and refreshing mouthfeel. All of the beers are highly drinkable, with moderate to low ABVs, but they certainly aren’t lacking in flavor. After I finished my flight, I stepped out back to check out the outdoor seating. There was a large assortment of tables, some on the patio, and some right by the river, and a musician was setting up for a patio performance. The outside area connects with Panacea Coffee House and Café, which has delicious sandwiches and other small bites. It’s quite convenient if you wanted to grab a beer from Frog Level and a sandwich from Panacea, and enjoy them both outside.

Frog Level Brewing is located at 56 Commerce St. and is open Monday through Saturday 2-9pm. 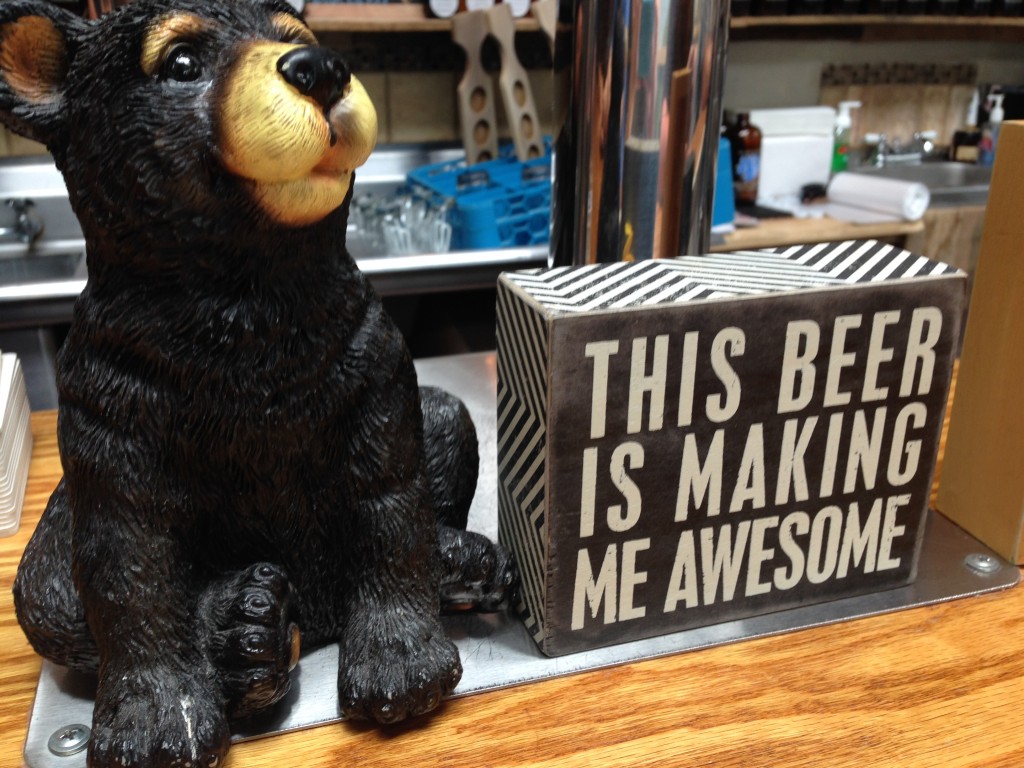 Later in the afternoon, I went to BearWaters Brewing Company, which is located in a small warehouse type building. Inside, the décor screams “mountain lodge” with trees painted on the walls, dartboards, bear figurines, and a kayak hanging from the ceiling. I couldn’t decide between the 9 beers they had on tap, so I split two flights with my boyfriend (8 beers for $12). We ordered the Bearded Bear Stout, Rip Current Red, Heady Eddy Pale, Blueberry Pale, Stiff Paddle IPA, Strawberry Rhubarb Belgian Farmhouse, Sliding Rock Ale, and the Spirit Bear IPA. My favorites were definitely the Blueberry Pale (strong natural blueberry flavor) and the Stiff Paddle IPA.

The owner was behind the bar and since a tour bus had arrived, he stood up and spoke to the group about BearWaters. What impressed me the most was that they brew on a single barrel system and still manage to have 9 beers (sometimes 10!) on tap, plus occasional bottle releases. My only complaint with BearWaters was that they only have pretzels to munch on, and the nearby food options are all fast food. However as long as you’re aware of that detail it is easy to plan a meal before heading to the brewery.

BearWaters Brewing is located at 130 Frazier St. Suite #7 and is open Monday through Thursday 4-9 and Friday through Saturday 1-9.

Her other hobbies include thrift shopping and baking with beer.
Previous Eco-Friendly, Philosophical, Patchouli-Soaked Quipster to Perform in Asheville
Next Fashion with a TWIST 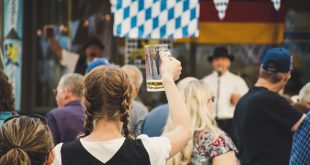 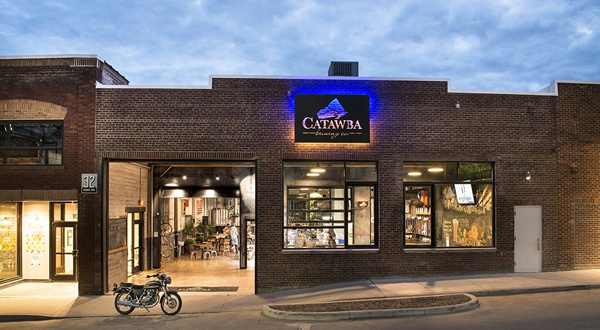 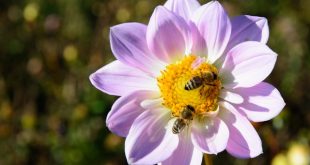