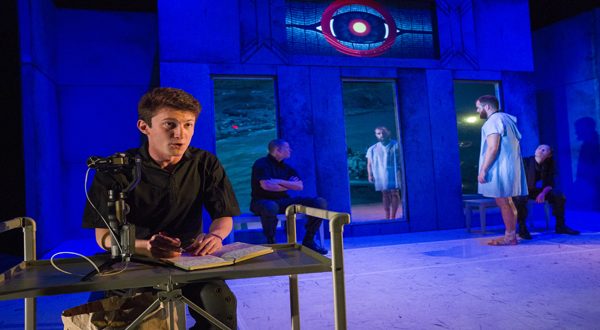 Aquila Theatre returns to the Wortham Center with dystopian classic ‘1984’ and ancient Greek drama ‘The Odyssey,’ Jan. 31 and Feb. 1 at 8 p.m.

New York City-based Aquila Theatre returns to the Wortham Center for the Performing Arts with two exciting classics for the stage: George Orwell’s “1984,” at 8 p.m. Friday, Jan. 31 and Homer’s “The Odyssey” at 8 p.m. Saturday, Feb. 1. Renowned for its laser-sharp direction and skilled interpretations, Aquila Theatre has grown an impressive Asheville fanbase by offering a new selection of classics each season in the company’s signature “two plays in two days” tradition, wowing audiences at the Wortham Center with the versatility of both its clever staging and its actors.

Founded in London in 1991 by Peter Meineck, Aquila Theatre moved to New York City in 1997 — and, throughout the years, the company has been praised as producing high-quality classics “with suberb acting and clever staging” (The New Yorker), as well as “one of the most inventive and daring theatre companies in the country” (The Lincoln Star Journal).

This season, Aquila brings two exciting productions to the Wortham Center, the first of which is George Orwell’s dystopian classic “1984.” Everywhere Winston goes, the Party is watching — even within his own home, behind closed doors, curtains drawn. Citizens are under rigid control, and even rebellious thoughts are criminalized under Big Brother’s watchful eye. In the 70 years since its release, “1984” has been referenced time and time again, serving as a powerful warning against the dangers of totalitarian society. As our modern world grapples with the threats and benefits of technological integration, Aquila Theatre’s production of “1984” provides a space to appreciate the value of individual thought — an evocative and timely narrative of personal freedom against political repression.

The second evening brings the wrath of Zeus to Asheville in Homer’s epic “The Odyssey,” a poem so ancient it predates Shakespeare’s works by more than two millennia. Ten years after the fall of Troy, Greek hero Odysseus has yet to return home to his wife and son. After battling sea monsters and cyclopes and other life-threatening obstacles, Odysseus finds himself imprisoned on the island Ogygia, held captive by the beautiful nymph Calypso. With some help from the gods, Odysseus might just escape — but he must use all his strength, skill and intellect to survive. When it comes to classical Greek dramas, “there are few [theatre companies] that can mount productions with the iconoclastic and high-voltage energy of Aquila Theatre Company and win praise from critics and scholars alike,” writes The New York Times.

Pre-Show Discussions with the Artist: Connect with the work, the company and other patrons at insightful pre-performance discussions at 7 p.m. on both Friday, Jan. 31 and Saturday, Feb. 1, in the Tina McGuire Theatre.

Theatre Masterclasses with Aquila: Join members of Aquila Theatre for two masterclass opportunities: “General Drama Masterclass” on Fri. Jan. 31 at 2 p.m.; and “Physical Theatre Masterclass” on Sat. Feb. 1 at 2 p.m.—both in the Henry LaBrun Studio at the Wortham Center. The General Drama Masterclass on Friday is a participatory class that explores some of the vocal and movement acting techniques used by Aquila in rehearsal and performance—a fast, energetic introduction to acting that involves the whole class. The Physical Theatre Masterclass on Saturday is designed to allow participants to experience the requirements and disciplines of working and performing in a physical theatre company by sharing some of the Aquila Theatre Company’s rituals in the form of movement and vocal exercises. Both masterclasses are open to high school, college-level students and adults with interests in Drama/Theatre, English, Literature, Education, Applied Arts, Creative Arts Therapy and Classics. More info at worthamarts.org.

Greek gods, monsters and adventure abound in Homer’s epic poem of antiquity. Follow hero Odysseus on his travels and tribulations — from encounters with sea monsters and whirlpools to cyclopes, island captivity and angry suitors — as he embarks on a quest to return home to his wife and son. Recommended for Grades 6-12. Monday, Feb. 3, 2020 at 10 a.m. at Wortham Center for the Performing Arts in downtown Asheville. Tickets: $10 for individuals; $9 for groups of 11 or more. Call the box office for availability: 828-257-4530.

About Wortham Center for the Performing Arts