Chocolatey and roatsy are two of my favorite words when it comes to beer. If a beer is either chocolatey or roasty they are typically beers that I like.Yesterday, Matt and I bottled the latest beer that I had brewed about a month earlier along with som...

Chocolatey and roatsy are two of my favorite words when it comes to beer. If a beer is either chocolatey or roasty they are typically beers that I like.

Yesterday, Matt and I bottled the latest beer that I had brewed about a month earlier along with some friends. I wasn’t sure what to expect since I had taken a recipe from Austin Homebrew Supply and added an additional pound of dark malt. I wasn’t sure what this modified recipe would do for the final product and since reading Designing Great Beer I have learned that randomly adding ingredients isn’t precisely the way to modify a recipe. So, as I set about cleaning and sanitizing the space, equipment and bottles I was little nervous about the outcome.

Once we started the siphon, I put some beer in the hydrometer tube to determine the final gravity and alcohol content. I think we finally have a hang of this process and the beer ended up being about 4.5% alcohol by volume which I think might be the first time I’ve made something more than near-beer.  (Actually, I don’t think that is true entirely, but I’m just not certain what the content was in the previous two batches was). 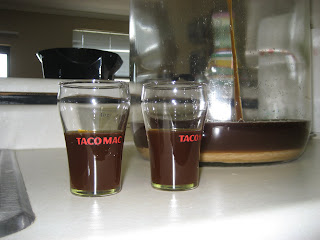 Then as the beer was transferring from the carboy to the bottling bucket, I poured two sample glasses of the finished but not carbonated beer.  I really wasn’t sure what to expect. I was a little worried, to be honest.  What if this beer just wasn’t good at all. I suppose I shouldn’t have been too worried, the beer had a great foundation with good flavors including chocolate malt.  It smelled pretty good so I proceeded to give it a small sip. And I was pleasantly surprised.  The chocolate and roast flavors were the most pronounced. It was probably the most complex beer I  made so far.  It is, I should say.

We filled the Party Pig and then bottled about another case and a half.  It just needs to condition for about three weeks or so and then chilled and enjoyed.  We plan to try the Party Pig first and save the bottles for a summer camping trip with friends so we can share it.  I can’t wait to taste it once it is carbonated in the bottles.

Laura M. LaVoie is a freelance writer living in Asheville North Carolina. She lives in a 120 square foot house in the mountains north of Asheville with her partner, Matt, and their hairless Sphynx cat, Piglet. The tiny house is off the grid and the couple generate all of their power through solar panels and collect all of their water from a natural spring. When not living off the grid, Laura enjoys the beer culture of the Asheville area, voted Beer City USA 4 years in a row.
Previous Not my usual, but nice
Next Damn, I make good beer!