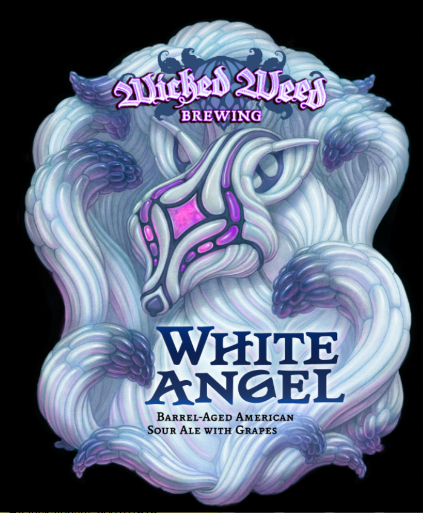 Wicked Weed Brewing is set to pre-sell the third offering in the Angel Series; White Angel, Saturday, June
27th at 12pm (EST) via Brown Paper Tickets. Aged for a total of 10 months, this Barrel-Aged American Sour rested on a total of two and a half tons of locally harvested Muscadine and Scuppernog grapes as well as Albariño grape must over the course of its life in the barrel. Tawny with a bright orange hue and wild grape aromas, this bone-dry ale echoes the sec traditions of champagne while still expressing the balanced
tartness of American sour beers.

“Over the course of its maturation we saw all these intense, beautiful grape notes coming out,” explains Head Blender and Owner Walt Dickinson. “White Angel is extremely dry and probably the driest sour beer we’ve ever produced. Assertively sour and tart with a juicy grape character this beer is a step in a different direction for this series, and it’s really exciting for us to see where this beer can go.”

The on-site bottle release and sale is currently scheduled for Sunday, July 19th at 12pm at the Funkatorium. In addition to the release, the brewery is planning a tap takeover with Cascade Brewing. The tap list will include all three angels, a variety of Cascade offerings, as well as a collaboration sour blend between the
two breweries.

The pick-up and release weekend surrounds Wicked Weed’s Funk Asheville: A Gathering of Sour and Wild Ales benefiting Pints for Prostates. Though tickets for Funk Asheville are sold out those who pilgrimage to Asheville for the release can expect to see a variety of sour beer events and brewers in town that weekend as breweries from around the country represent at Funk Asheville.