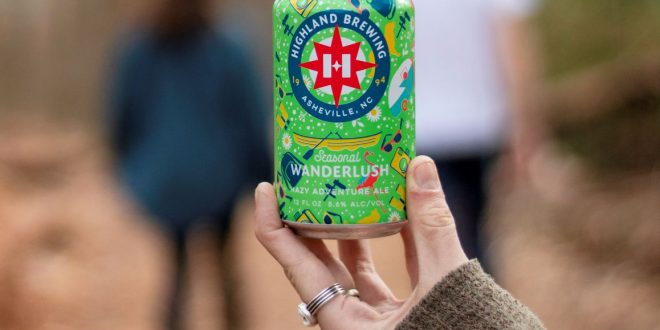 On March 7 at 5 PM, Highland will embark on a new adventure with the official opening of the first phase of walking trails that sprawl throughout the brewery’s 40-acre campus. The opening will be highlighted by a guided hike led by Highland’s President and Family-Owner, Leah Wong Ashburn, alongside National Geographic Adventurer of the Year and record-holder for through-hiking the Appalachian Trail, Jennifer Pharr Davis.

That weekend, Pharr Davis will also serve as emcee for the internationally recognized Women’s Adventure Film Festival that will take place in Highland’s Event Center on March 7 and 8, 2020. She will also launch the 10th-anniversary edition of her book, Becoming Odyssa, on Saturday night.

“Leah and I met on the podium at the Asheville Chamber’s annual Women Up award ceremony,” said Pharr Davis. “We were both honored with awards and we started talking. She told me about the trails at Highland and I thought, what better way to kick off a weekend of Women’s Adventure Film Fest and the 10th Anniversary edition of my book than a walk in the woods with two trailblazing women!”

Highland’s walking trails will offer a wooded retreat with sections along a creek and an old railroad just steps outside the brewery’s original Taproom. Public tours of the trails will also be offered throughout the summer of 2020. While guests will not be able to bring beer onto the trails, they will certainly be able to enjoy a brew in the taproom or meadow before and after their walk.

Ashburn said, “I have envisioned trails at Highland for years. Now we can connect guests to why it says “Southern Railways” on our building. We can get down to Gashes Creek, which we’ve cleaned up twice with great help from Asheville Greenworks and looks so inviting now. Our property offers so much, from the rooftop mountainscape to the tree-lined meadow. With these trails, our guests can experience the full range of natural scenery at Highland”.

The trail opening will coincide with the release of Highland’s spring seasonal, Wanderlush Hazy Adventure Ale. A fan-favorite in only its second year running, Wanderlush is a sessionable hoppy ale with notes of lemon zest and melon from hops like Amarillo and Simcoe. At 5.6% ABV and 45 IBUs, this hazy, mellow ale was made for summer wanderings. A portion of Wanderlush’s release party proceeds will be donated to Southern Appalachian Highland’s Conservancy. After the release, Wanderlush will be available in six-pack cans and on draft wherever fans may roam in Highland’s Southeastern distribution footprint

The weekend’s adventures kick off on Friday, March 6 with Wanderlush’s release party and continue into Saturday, March 7 with the trail opening and hike at 5 PM and the Women’s Adventure film Fest at 6 PM. To learn more about the weekend release events and Wanderlush, please visit highlandbrewing.com/events.

We want to be the brewery of choice in the Southeast. To achieve that goal, we believe it takes more than great beer. With each new hire, it doesn't take long to learn Oscar's mantra: Honesty, integrity and respect. Nothing about beer, not specifically. But the larger ideals that lead to great beer - caring about how it's made, caring for the people involved, from the grain farmer to the mom at the grocery store. Operating within these lines gives rise to a culture around a product. A culture that is sustainable for our employees, our customers and our environment. Come see us! Get a beer at Asheville's first legal brewery and learn what we believe in.
Previous Valentine for the Earth March And Street Blockade Planned By Extinction Rebellion WNC
Next Montford Music & Art Festival Announces Early Info for 2020 Event